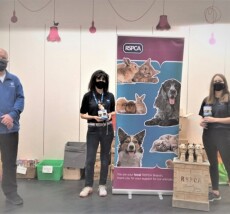 When Putney Animal Hospital closed last year, RSPCA Wimbledon, Wandsworth & Sutton District Branch lost their Cat/Kitten Rehoming Centre, situated on the site. The branch manager, Laura Kennedy, approached the Love Wimbledon team to see if we could help the branch to find suitable premises to store their equipment and supplies for their animal welfare work in the area. The RSPA branch also supports Wimbledon Foodbank with a Pet Foodbank, and accepts and processes donations for their two charity shops in Earlsfield and Wandsworth. It was crucial to find available space to organise these vital activities.

Kevin Gallagher, Operations Manager at Love Wimbledon, approached the Centre Director of Centre Court Shopping Centre, Simon Plumb, to see if he could help. Simon kindly agreed to supply a unit (free of charge) for an initial 6-month period to Laura, and the whole branch, who were delighted and relieved at the news.

“As part of our ongoing effort to engage with the local community, we are pleased to be able to facilitate local enterprises in offering space and resources where we can. I personally am delighted to support such a worthwhile charity in a time where charities are in such need in the locality.”

“Many thanks to both Kevin from Love Wimbledon and Simon from Centre Court for helping us through this difficult situation, it has been a real lifesaver!”

Love Wimbledon like to support great causes, where possible, and help build new connections for our businesses, which strengthens the interconnectivity in Wimbledon.