As we approach the 2016 Wimbledon tennis Championship tournament, visitors will see new pavement plaques marking The Wimbledon Way. Initiated in 2012 The Wimbledon Way encourages both visitors and regular users of the town centre and the Village to appreciate everything Wimbledon has to offer by walking anywhere between The Polka Theatre, Wimbledon station, the Village, Wimbledon Common and, of course, the world famous All England Club. 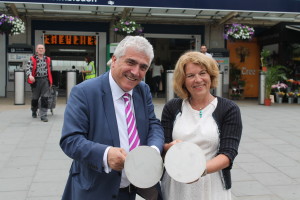 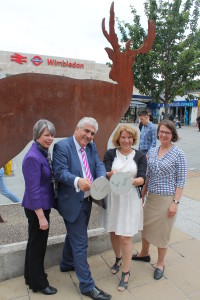 The plaques have been installed to complement the way finding posts along the route and information on Wimbledon’s culture and heritage, with 27 points of interest, more details available on our site.

Diana Sterck, Chief Executive of Merton Chamber of Commerce, the organisation who initiated The Wimbledon Way as a legacy project for Wimbledon as a result of the 2012 Olympics, said “Wimbledon as a whole is a wonderful asset and we want people to spend time with us, visit our businesses and appreciate all of the area’s rich heritage and culture. I always say to visitors to walk the Wimbledon Way as the healthy alternative to using transport.”

Merton Council Leader Councillor Stephen Alambritis said: “The Wimbledon Way project is an exciting initiative and the council is encouraging as many people as possible to walk to this year’s Wimbledon Tennis Championships using the new route.

“The Wimbledon Way will offer residents and visitors alike a healthy and pleasurable stroll through Merton, taking in the many landmarks that make our borough so special. Merton Chamber of Commerce has also worked hard to ensure visitors get a chance to see our great local shops and businesses along the way.”

Helen Clark Bell, CEO Love Wimbledon BID commented ‘The markers demonstrate the integral relationship of the tennis to the town. Using the Love Wimbledon map or The Wimbledon Way website you can clearly see the fascinating buildings and intriguing narrative from the Turkish baths to the Gold Post-box Olympic legacy. There is a secret history waiting to be discovered along this route whilst residents shop and enjoy Wimbledon.’

To find out more: